Why the climate-tribe doesn't catch on

Melting polar ice caps, floods, heat waves, hottest summer ever, extreme weather conditions,... The headlines don't lie; neither do the climate activists. And yet the sense of urgency in the general public seems to be lost. And the momentum? It too got lost. There is no real climate revolution. Why? What is missing? Why is it that the climate crisis-tribe is unable to create a momentum, to put the status quo aside and to start the real revolution?

Each group of people can be seen as a tribe, and the same goes for an ideological movement. After all, it has the right characteristics: it is a (albeit very large) defined group of people, who have their own norms and values and who communicate with each other in their own language.

It is not always easy to define one's own language, or what can be considered a language. For example, to show their support during the revolution, the French wore a red, white and blue circular emblem on their hats or coats. This three-coloured cockade first acquired significance for the revolutionaries when a red and blue cockade (the colours of Paris) was presented to the king after the assault on the Bastille. 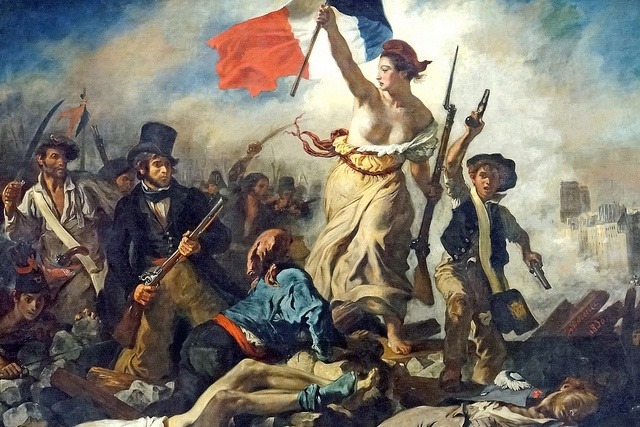 Every ideological tribe has its own 'language': in politics, people stick out their clenched fists or stretched arms to communicate their ideals with others, persecuted Christians drew fish to make themselves known to each other, the anti-nuclear movement used an inverted 'tree of life' that later became the universal sign for peace, and even the naked bodies of Femen can be seen as a language specific to the (or at least a form of) feminism movement.

It is not always easy to define one's own language, or what can be considered a language.

Language is much more than just signs and symbols.

It is sometimes said that music is the oldest language, and it is therefore evident that music as a language is also present within the tribes discussed here. The French revolutionaries knew the ‘Chant de guerre pour l'Armee du Rhin’, later better known as the Marseillaise. The extremes of the political spectrum also used singing as a common language: the International unites the left, while the extreme right calls for ‘linkse ratten, rol uw matten’*. On the other hand, however, the right unites behind national anthems, while the extreme right is fought with, for example, Fight the power of Public Enemy. The peace movement gently hums 'Give peace a chance', and clenches its anger in Jimmy Hendricks' guitar solo, Bruce Springsteen's raw voice or Bob Dylan's witty lyrics. Together with others, Sting wondered if the Russians did like their own children too. And even Pussy Riot and Spice Girls ensure that the power of women can unite behind music.

And today we see another movement. One that makes large groups of people identify with each other, and that has almost all the characteristics of a tribe. Yet this movement does not succeed in unifying itself in a clearly recognizable way. I'm talking about the environmental movement, of course. While 16-year-old Greta's speech clearly divides people into believers and non-believers, tribesmen and opponents, the Climate Crisis-tribe does not succeed in clearly grouping and strengthening itself. On the contrary. Fragmented, this would-be tribe takes up the fight: teenagers strike toothless every week, the older green movement gets easily put aside without any fighting spirit, and a whole group of concerned citizens remain a bit indifferent on social media, with the only weapon being a thumbs up.

As long as Greta's sympathizers do not have singers, the movement she stands for is doomed to be lived out.

Where does this imminent revolutionary movement differ from the others?

As long as Greta's sympathizers do not have singers, the movement she stands for is doomed to be lived out. So this is an appeal to the talented bards of today who have a warm (but preferably not too warm) heart for the world. Perhaps they hold the key to make the world a little better, or at least to keep it from getting worse.

Meanwhile, people like me, with less musical talent, might be able to help with the search for existing songs, to turn them into battle songs? This is a call to further expand the playlist. And maybe together we'll be the next Bob Geldof...

*The musical talent of the far right leaves much to be desired, but the phrasing ‘Linkse ratten rol uw matten’ stems from when the French army was stationed in Flanders. It was originally aimed at ‘Franse ratten’, later at ‘Waalse ratten’; but in the end all of those rats are ‘politely’ asked to roll up their camping mat and leave Flanders.

Got lyrics? Want to jam?

Drop me a line at jori@gaga.be

Get all the good from Gaga. Don't miss out on the bad stuff either.